CRASH picked up his first can of spray paint in 1974 at the age of 13. The Bronx native, born John Matos, was only halfway through middle school when he began creating full-scale burners on New York City’s subway trains. He credits his early attraction to the bold colors of graffiti to his Puerto Rican roots. “I think the fact that most Puerto Ricans are very eccentric — we love color, we love movement, and graffiti actually is that. It’s movement. It’s a nice mesh,” he says.

His art took on new life in the mid-90s when he painted a Signature Stratocaster for Eric Clapton. Their partnership carried over the years and birthed numerous followups to the first “Crashocaster,” along with a “CRASH x Teddy M” Strat guitar collaboration with Ed Sheeran and a luggage capsule collection with TUMI. “Every project is different, so I go with my instinct in terms of what could work best. It depends on what I’m trying to communicate,” he says of his various partnerships. “The Ed Sheeran thing was something that happened by accident because it was through Eric Clapton, but TUMI was an interesting project because I had to work with an art director to try and accommodate what I do on to something that’s going to be moving — like a subway train.”

“We still have issues getting into museums because of what we do, so the rebellious nature that’s in the artwork holds us back a little, but also gives us the opportunity to say things that couldn’t say.”

Over the past 40 years, CRASH has been able to witness the wild changes that have taken place in the art world. He’s experienced the multifaceted industry’s swift development thanks to technological advancements, noting that the Internet has shone its spotlight on graffiti to make the art more accessible. “I’ve been doing [graffiti] for almost 40 years, I don’t think it has lost its identity. I think it’s become more mainstream but it still has an edge,” he clarifies. “We still have issues getting into museums because of what we do, so that rebellious nature that’s in the artwork holds us back a little, but also gives us the opportunity to say things that couldn’t say.”

CRASH sat down with HYPEBEAST during Singapore’s Culture Cartel 2019 to talk about the camaraderie in graffiti, his hopes for the movement’s future and plans for a 40-year retrospective.

HYPEBEAST: Do you think the companionship of a group remains if you change the setting from a subway train to an indoor art studio?

CRASH: I try to. In the last couple of years, I’ve done a lot of large murals and I just put in my earphones and do it. But when there are other people and communication involved, it’s just a lot more enjoyable. It’s different in my studio because that’s my area of solitude where I just paint and do what I do.

What are some things audiences don’t normally pick up on when you present a piece that’s been created by a group?

I think what gets lost is the amount of time that gets put into it. I like to paint large and sometimes, if you look at the piece, you’re used to just a simple image or whatever I’m working on, but actually every painting I do is about six to seven images. It’s not really easy to put it together. I also use a lot of paint and colors so making all the colors work is a different challenge. There are a lot of things that are going on.

“Today, I could do something in Singapore and someone in the Bronx or New Jersey or California could see it.”People have begun to see graffiti less as vandalism and more as an art form, especially when it’s explicitly an act of protest. As we enter the new decade, how do you see graffiti evolving in the next 10 years?

The evolution of it, I can’t explain because if you had asked me that 20 years ago, no one really realized what was going to happen with the Internet. Facebook and Instagram really changed the game because it gives everyone the opportunity to see something that they normally wouldn’t see. If I had painted a wall somewhere in 1980, only the local people would know about it. Today, I could do something in Singapore and someone in the Bronx or New Jersey or California could see it. It opens up the world and makes it smaller in a way, which I think is great because it’s all about the conversation.

Seeing as we’re on the topic of the modern times, this is your first time at Culture Cartel. How are you liking it so far?

It’s great. Very different from other art fairs and cons that I’ve been to. This one’s not all over the place, it’s very specific but it works because everything feeds off of each other.

Looking forward, are there any big projects or plans you have lined up for 2020 that you can discuss?

I’m going to be celebrating 45 years of painting from subways into canvas work, so there are going to be some exhibitions taking place in Florida, Paris, Italy, maybe Germany. There’s a lot of things that are happening.

Oh wow, I guess what I’m thinking about is, looking back but with the realization that there’s much more ahead. So we did something 30 years ago, 20 years ago, 10 years ago, it doesn’t stop you from trying to progress and do something more dynamic.

Time dictates everything. Like with music, no one thinks of the way music has shifted from 10 years. It’s the same way with art, you just do your thing and hope that the world’s not gonna end tomorrow. 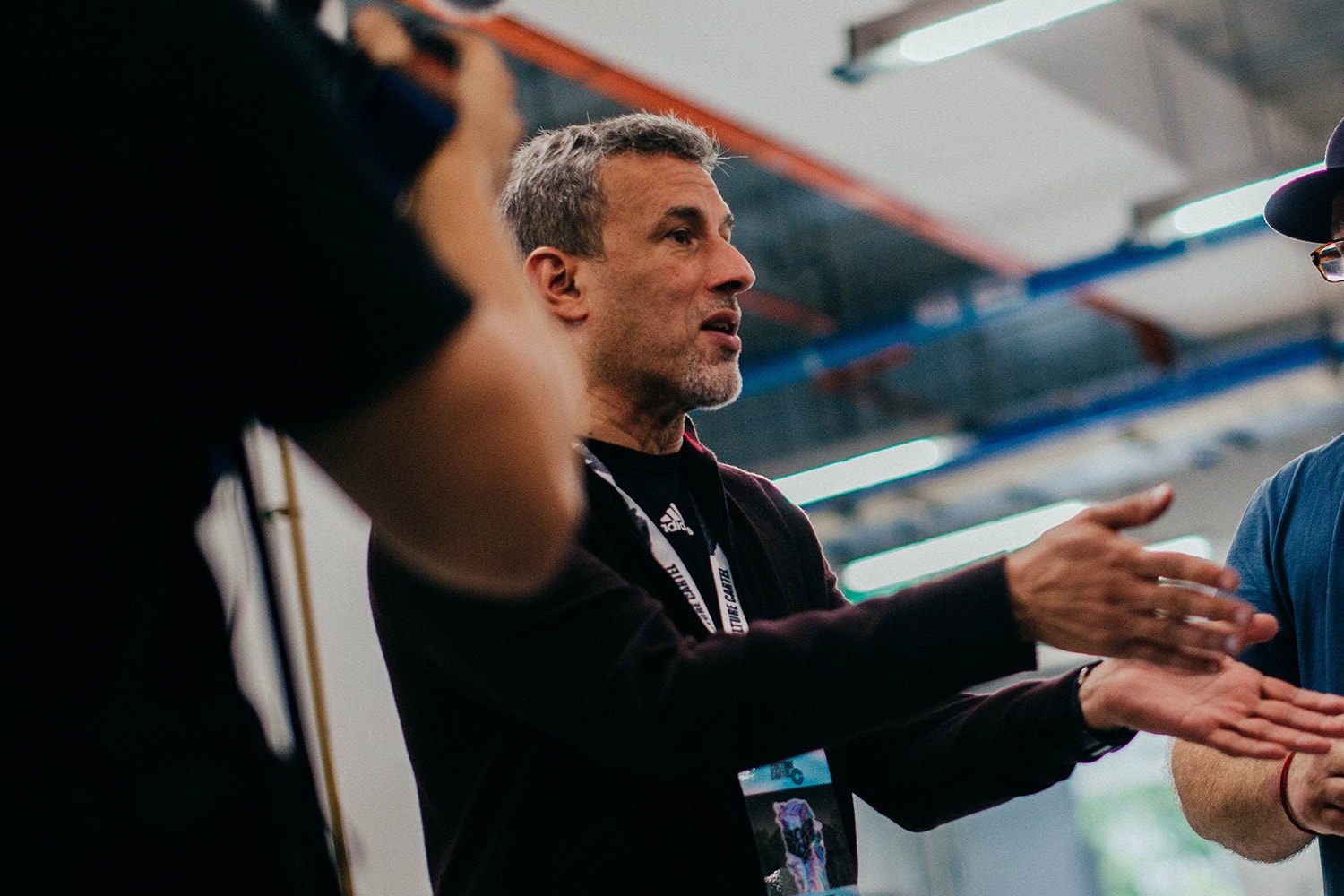